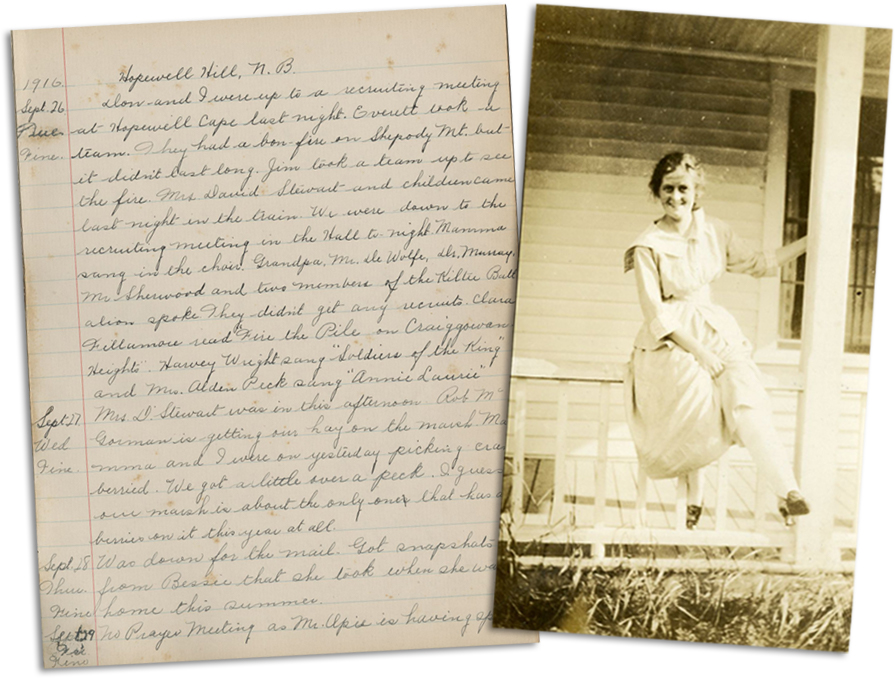 Facing my laptop at the start of 2021 in Ireland where I now live, I was browsing through the diaries available on Operation Canada and was instinctively drawn to the diary of Ella Rogers, a young woman from New Brunswick, born in 1900 to a farming background at the dawn of the 20th century.

Ella started writing her diary when she was 8 years old - very much like myself, born 80 years later in another part of the world - in Sarajevo, Bosnia and Herzegovina - just as the 20th century was closing its final chapter. Much like my own diary, Ella’s own also changes and morphs from being a record of a happy and carefree time to a record of war and, in her case, life on the home front.

Ella initially describes the carefree summer days of play, school and music lessons, friends and skating in winter months. In those early days, she wrote sporadically, very much like myself - I did not feel like there was too much to note as carefree days rolled one after another, punctuated perhaps by holidays, invitation to friends’ birthdays and the occasional exam in school. However, one can see how Ella’s diary ramps up from 1914, as the Great War of 1914 envelops the whole world, even the quiet carefree world of Ella Rogers. Though she lives in New Brunswick away from the trenches and battlefields forming in Europe, her diary slowly but surely becomes infused with the inevitable reality the whole world has descended into.

As well as noting the weather conditions at home and news of various people in the community, the diary also makes note of the realities of home front activities - fundraisers, recitals of war poems, knitting socks and preparing Christmas parcels for the soldiers, but also more worryingly deployments of people she knows to Europe. Ella notes their names, and the battles and locations in Europe - including telling her diary of the picture of her uncle Don in uniform who himself was sent to the front. In reading this particular moment, I was reminded of the day when I came home from school some months before the war in Bosnia took off and saw my father in his military uniform, a sight wholly unfamiliar to me at that point. The shock of seeing my otherwise suit-and-tie court-attending lawyer father suddenly thrust into a new role that did not make sense and immediately brought a sense of worry and danger with it - it was a jolt of reality of what was to come. In Ella’s case, Uncle Don’s deployment brought letters from the front, one of which had news of him being wounded… and eventually, his tragic death. Alas, it is not the only one she notes in her diary.

As I was reading it, I saw this parallel movement - of Ella skating across the ice at home, while soldiers are sailing across the ocean towards war-torn Europe, some never to return. Life in New Brunswick continues, babies are born, people get married, birthdays are noted… yet it feels like no home is untouched by the presence of the war.

I loved the different notebooks that Ella used as her diaries - they grow with her from tartan colourful notebook to using a ledger in absence of anything else - to a more grown up notebook as she reaches the ages of 18 and 19. The notebooks themselves carry her journey from girlhood to becoming a young woman and eventually a college student, much like the events she describes, going from raspberry picking to socials and staying out with friends till 1am. The use of the ledger made me smile - again a parallel with my own experience. During the siege of Sarajevo I lived through, there was no way of buying nice pretty notebooks, something I would have paid very much attention to. Instead I ended up using one of my father’s work diaries, a serious business-man type notebook that I tried to personalise with cutout pictures from magazines. Ella equally used her sister’s ledger but what I perhaps find quite touching is that we both felt we needed to continue to write and note everything that was going on around us - and it did not matter what our canvas would be.

As well as a record of war, I was drawn to Ella’s diary especially at the time of writing this (January 2021) as it held a record of the Spanish Flu pandemic, something that is resonating so much with all of us today. Around the fourth anniversary of the war, the global pandemic which engulfed the world touches Ella and her world too. I wanted to see what was life like for someone 100 years ago and found surprising similarities - announcements of school and church closures, no public gatherings allowed, and all the while counting the number of new cases per day, noting familiar people who succumb to it and unfortunately yet again also counting more deaths.

But everything comes to an end. The war ends, the pandemic ends. Seeing the parallels between 100 years ago and now, between Ella and I, between us all today and the world that Ella lived in - there is synchronicity of times, events, tragedy, resilience.

My final reason for wanting to concentrate on Ella’s diary is that 18 months ago, I became a mum to a little girl, and we named her Ella. She is now living through her own pandemic. Maybe one day, she will write a diary too, but I hope it will only ever be filled with carefree days of raspberry picking, parties and friends.

The diaries of Ella Rogers can be viewed here. Transcriptions of diary content can also be accessed from each diary’s page.

11. Page from diary of Zlata Filipović, courtesy of the author.

12. Photograph of Zlata Filipović, courtesy of the author.